Cantal is a superb spot for trail running and according to runner Marc Barthélémy, the area offers an infinite number of possibilities. This young hotel and restaurant owner from the village of Saint Jacques des Blats has first hand knowledge, having competed in both the UTPMA and the Pastourelle, two emblematic trails organized in Auvergne.

Marc welcomes me at the oak bar of the hotel-restaurant “L’Escoundillou” and we have fun counting up the trail bibs that decorate the wall opposite. “It’s often a starting point for a chat with a customer,” says Marc Barthélémy. “It’s quite unusual to be a trail runner and to work in the hotel-restaurant business, but getting out into the mountains is my breath of fresh air,” confesses the sportsman.

It all began when he took part in the first edition of the UTPMA in 2012, where Marc finished ninth. “I got a taste for trail running and really trained hard, seven to ten hours a week. The following year, I came fifth finishing in two hours less than the year before! Then I finished 37th overall in the Diagonale des Fous trail on the Reunion Island, covering a total of 170 kilometres in 33 hours with a 10,000 metre cumulative height difference! I also came 64th at the Mont-Blanc Ultra Trail and took part in the Pastourelle, a 53 kilometre trail around Salers.”

In 2018, Marc finished first in the Enjambée du Carladès, a trail around the village of Vic-sur-Cère. “The trail takes us up to the Puy de la Poche and Faillitoux waterfall. I haven’t however taken part in the Noctambule Thiézacoise yet, which is organized at the end of September in the village of Thiézac. 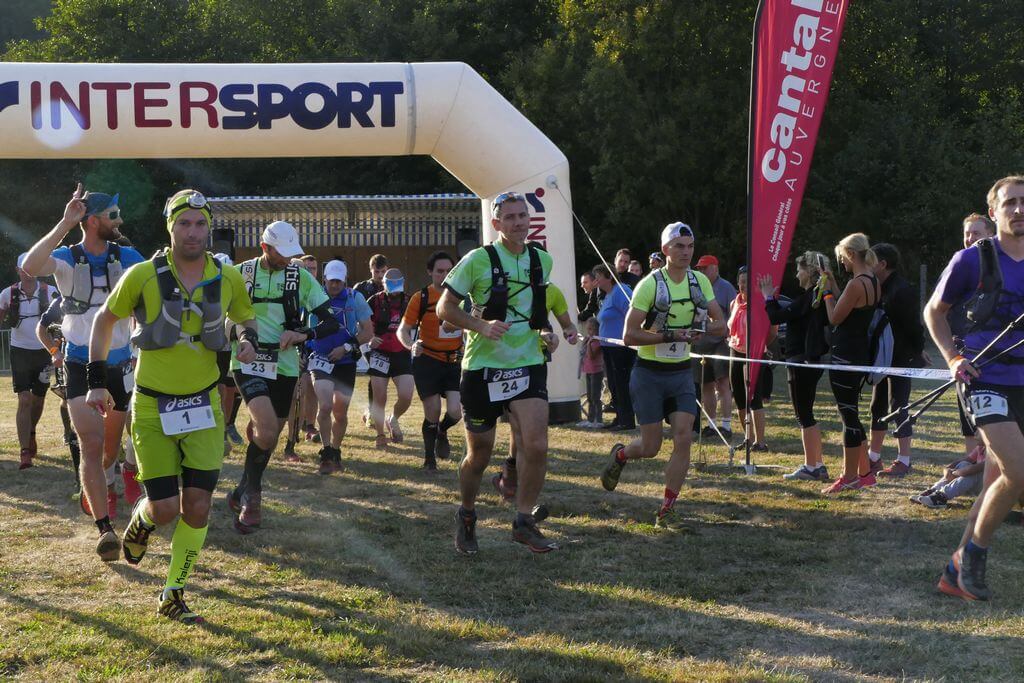 For runners starting out from the village of Thiézac, here’s Marc’s advice: Climb to the top of the Elancèze where you can enjoy a 360° view of the Mandailles and Thiézac valleys. You’ll go past Trielle, Le Clou, the Puy de la Poche, with a view over the Plomb du Cantal. “When you get to the Puy de la Poche, carry straight on until you get to the Lagat mountain pass, Notre-Dame-de-la-Consolation,” explains Marc. Since taking over the Escoundillou Hotel in St Jacques des Blats, this has now become the starting point for his runs. “When I finish work, I love going out for a run up to the top of the Plomb du Cantal along the Arpon du Diable ridge and then back down past the Buron des Gardes. I head back along the road or the path that runs near the Gardes watermill in the tiny hamlet of Ferval. It’s a great two-hour run! I also enjoy the tracks around the Puy Griou because the circuits are really well marked-out. The possibilities in Cantal are absolutely endless. Circuits can be downloaded onto your smartphone using different apps and you can then access them offline. We have two trail running hubs, one at the Puy Mary and the other in Murat. The French national trail running team regularly trains in Mandailles. If you compare the terrain here to that in the  Alps or the Pyrenees, it isn’t dangerous here. However trail runners must be really careful on the ridges where the weather conditions can change dramatically all year round. I always take waterproof bottoms, a mac and a pair of gloves with me when I’m out running. At the beginning of May, it can still snow on the Cantal mountains.”

Marc makes no big deal of his talent and considers himself a versatile trail runner. “I like pushing myself and going out on long runs where I must manage many different many factors: food, tiredness, physical effort, for example. Trail running is a healthy lifestyle, but working in the hotel and restaurant business, I still enjoy a good meal. If your mental willpower is strong then there’s no need to be over-trained. My aim is just to stay fit and from time to time, to push myself a bit harder!