Cantal is full of spectacular and easily accessible waterfalls. Hiking enthusiasts will find other sites as they explore footpaths that are more off the beaten track. We interviewed Christian Gregoir, a local walking guide, to find out his favourite places to cool off in the area.

Carladès: Three waterfalls a stone’s throw away to discover at your ease

Faillitoux waterfall is one of the most impressive in Cantal. Out of the summer months, you can park along the  D59 road just after the hamlet of Lasmolineries. It’s then just a 20 minute walk to get there. During the summer however, Christian recommends that you park just before Lasmolineries near the bread oven. From here, there’s a lovely 4.5 km loop that takes you along a forest path lined by dry stone walls. You’ll reach the waterfall from above and will then make your way down to the river where you’ll enjoy a spot of shade.

Roucolle waterfall flows over a cliff that rises above the Pas de Cère gorges. The platform overlooking the waterfall is just a five minute walk from the Pas de Cère car park just off the main road between Vic sur Cère and Thiézac. The view is absolutely breath-taking.

There are two walking trails to take you to the “Pas de Cère” site in the middle of the gorges. If you’re at the viewing platform overlooking Roucolle waterfall, the walking trail known as the “Mysterious Gorges of the River Cère” will then take you deep down to the river. The return trail is 4 km and you’ll need about an hour and a half for the round trip. An alternative is to park at the viistors’ car park in the hamlet of Salvanhac (along the valley just outside Vic-sur-Cère). From here, it’s an easy  20 minute walk along the River Cère to the foot of the “Pas de Cère” gorges.

Back in Vic-sur-Cère, why not follow the narrow footpath running along the Iraliot stream just behind the church. You’ll make your way up the the Conche waterfall, a charming spot hidden away. 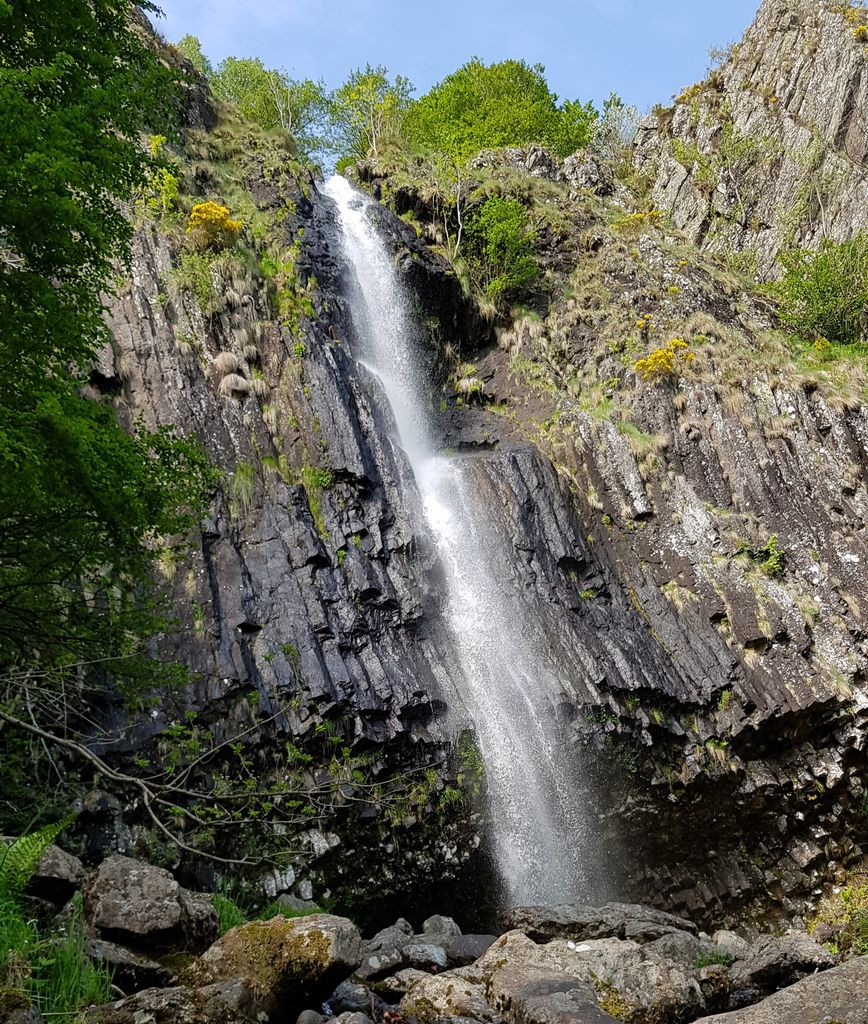 Waterfalls in Cantal where you can enjoy a swim

On the far edge of the Carladès area, along the River Siniq, you’ll find Capat waterfall, near Le Capat in Malbo. “The ground can be slippery, but while taking care you can venture behind the waterfall which really is quite spectacular,” says Christian. “If you go upstream, you’ll reach another waterfall that you can see from above. As you leave the wood, simply head off the footpath and make your way up towards several small waterfalls, including one with a sun-bathed pool. If you carry on upwards, you’ll be delighted to come across more small and charming waterfalls. Some of the clients I accompany also go swimming in Luc waterfall near the village of Mandailles.”

Another really nice spot to visit is Chambeuil waterfall hidden in the woods opposite the village of Laveissière near Murat. “There’s a picnic area in the car park near Chambeuil watermill,” Christian explains. “From there, a path leads to this charming mill and then up the valley.  The waterfall really is worth a visit.”

Among one of the most famous waterfalls in Cantal is Salins waterfall near Salers. You can see it from the D922 main road, where you can park to admire the panorama. It’s an impressive site against a backdrop of a 32 metre high basalt cliff. You can even make your way behind the waterfall without getting wet… unless you want to of course!