How was the Auvergne volcano formed? Is the Puy Griou a dome? What is a basalt rock table? You’ll find answers to all these questions and more by joining volcanologist, Frédéric Lécuyer, on a field visit with Carladès Tourist Information Office.

The first thing you’ll learn when you explore the Auvergne Volcanoes Regional Nature Park, is that there is only one volcano in Cantal. A stratovolcano to be precise, and the largest one in Europe! “Cantal’s stratovolcano and the small monogenic volcanoes of the Chaîne des Puys, a range of volcanoes in Puy de Dôme, are not at all the same, neither in terms of size or time scale,” explains Frédéric Lécuyer, professor in Earth Sciences, a volcanologist, and the author of the exhibition presented at the Carladès Tourist Information Office in Vic-sur-Cère. The Cantal Volcano extends over an area of 60 km by 70 km, while the Chaîne des Puys volcanoes are no more than 1.5 km in diameter and were formed in just a few years at the most!”

A stratovolcano that was 10 million years in the making

Unlike the volcanoes that make up the Chaîne des Puys, Cantal’s stratovolcano was formed over a period of 10 million years and in three main phases from several large magmatic chambers:

Between 13 to 9 million years ago, a few slag cones emitted basalt rock flows;

Finally, between 6 to 3 million years ago, large fluid basalt rock flows covered the volcano, forming, what is now called, the Planèze plateau.

“It’s a bit like a cake made of magma,”continues Frédéric Lécuyer. “Subsequently, the surface was then gradually eroded by the quaternary glaciers, thereby enhancing the contrast between the core and the periphery of the volcano.”

The Plomb du Cantal, a relief of solidified lava

Although it probably once reached the height of just over 3,000 metres at its peak, the Plomb du Cantal today peaks at a height of 1,855 metres. “Magmas of basanite, a basalt rock poor in silica, passed over the whole series of previous flows and breccias to form, 2.9 million years ago, a slag cone that was eroded away. Only the hard lava at the bottom of the crater has withstood the test of time, giving the Plomb de Cantal its strange rounded shape.”

The Puy Griou, one of Cantal’s emblematic summit

As for the Puy Griou (1,690 metres), it constitutes, along with its neighbouring peaks, the Griounou (1,514 m) and the Usclade (1,484 m), a set of phonolite domes which date back to the late phase of the formation of the stratovolcano. “During the last Ice Age, the dome of the Puy Griou emerged from the ice. The alternation between periods of freezing and thawing resulted in massive rockslides and scree still visible at its base and which accounts for its conical shape. The Puy Griou and the Plomb du Cantal are important landmarks in the area.” 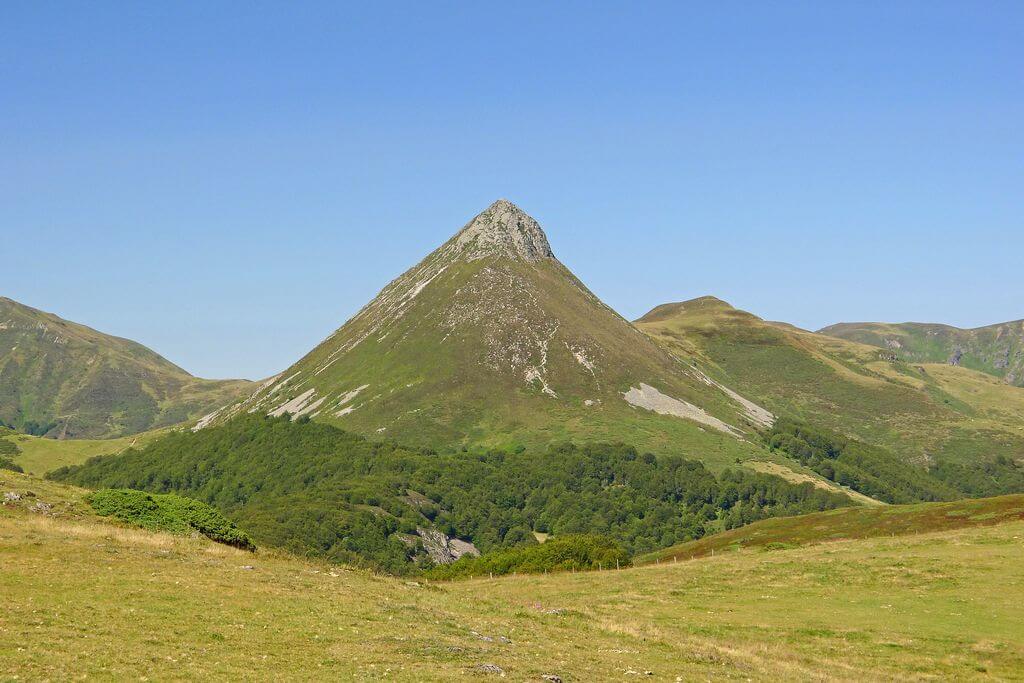 Where to observe impressive deposits of volcanic debris in Cantal

Dark megablocks can be spotted near the N122 road near Thiézac, not far from the Puy Griou. “These are the remains of an ancient rhyolite dome dismantled by an avalanche of debris”, explains the specialist. “Entire sections, with practically no deformation and embedded in a paler-coloured matrix, moved from the volcano 40 kilometres higher up.”

The Gorges of the Pas de Cère, a remnant of the Ice Age

The Gorges of the Pas de Cère bear witness to the glaciers that covered Cantal up to 20,000 years ago. “The ice flow was slowed down at this point by deposits of fallen debris resulting in the forming of a glacial bar. Around 12,000 years ago, the glacier disappeared, replaced by flowing water that, over time, carved deep gorges in the Pas de Cère deposits. As you continue along the footpath that leads to the Roucolle waterfall, you will also see the deposits from fallen debris debris.”

The disappearance of the great glaciers, destabilizing the slopes of the valleys, has also led to vast landslides forming areas like the Chaos de Casteltinet on the side of the valley opposite Thiézac.

The basalt rock organs of the Faillitoux waterfall

Faillitoux waterfall flows down one of the rare outcrops of ancient basalt rock and is a spectacular site in many ways. “It is a thick lava flow that measures 40 kilometres in length and that is 9.5 million years old, with impressive prisms that can reach a diameter of more than 50 centimetres”, explains Frédéric enthusiastically. “This is ankaramite, a variety of basalt rock extremely low in silica, rarely found in Cantal, rich in large crystals of olivines and pyroxenes.” 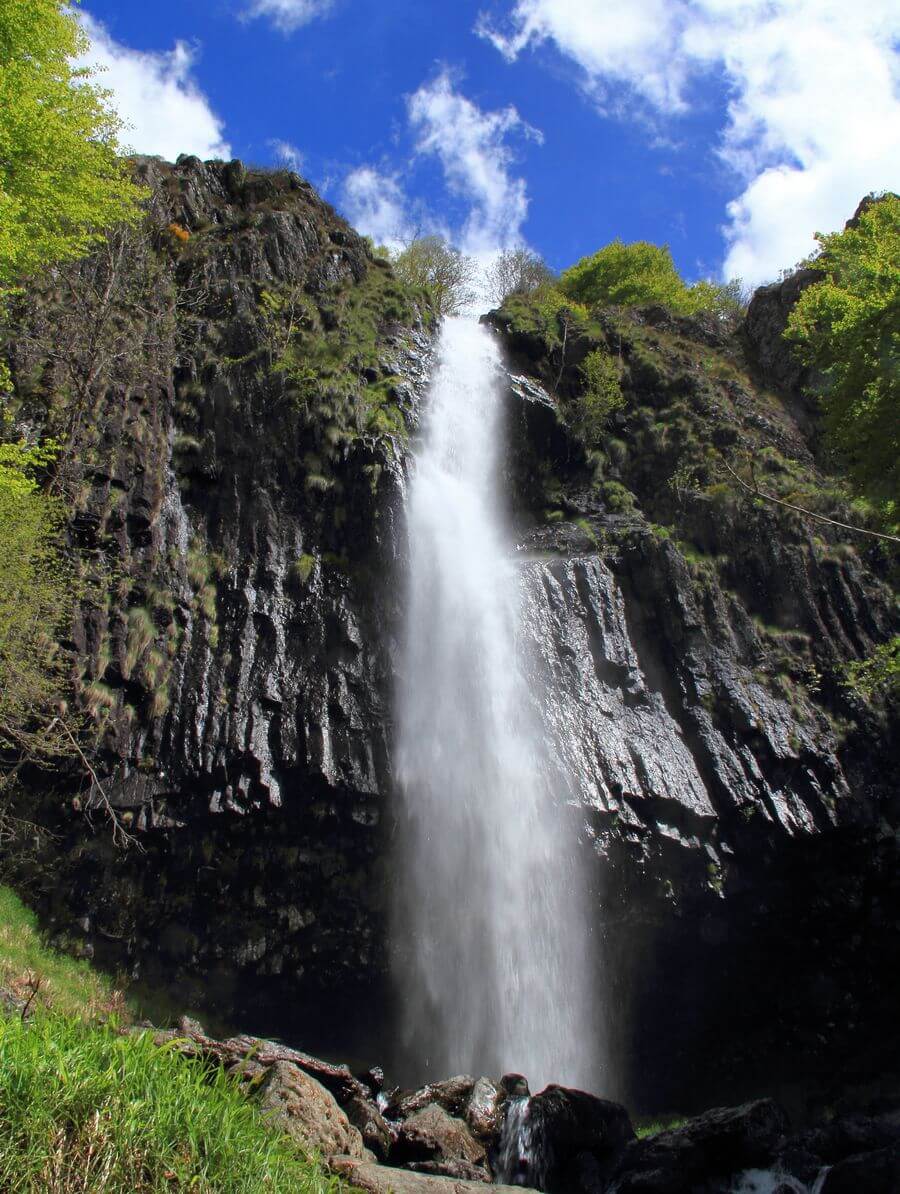 Near the Col de Curebourse, the Rocher des Pendus is higher than the exit points for the magma which connected the flows to the Planeze and which formed the rock table in Carlat and the unique Ronesque rock table. “These two basalt rock tables are the result of a flow of smooth-running lava which originally began in the bottom of the valley. Five million years later, the lava dominates the landscape,” says Frédéric Lécuyer. A rational, scientific explanation that takes nothing away from the mysterious atmosphere that emanates from this extraordinary place.