Situated at the heart of Cantal, the Massif Cantalien is the result of impressive volcanic activity and today this ancient landscape is home to all the highest summits in the department, extending from the Puy Mary to the slopes of Le Lioran resort and the Plomb du Cantal. The Massif Cantalien is the perfect holiday destination not only for nature-lovers but also for thrill seekers looking for a taste of adventure in the great outdoors. The Massif Cantalien has it all, with breath-taking scenery whatever the season. Whether bathing in warm sunshine during the Summer months or covered in a blanket of thick snow at wintertime, the Massif Cantalien will work its mysterious magic and have you under its spell in no time at all. So relax, enjoy precious moments with friends and family, live and share new experiences… to then come back again and experience more of what this wonderful landscape has to offer!

The Plomb du Cantal, a sleeping giant with a rounded back 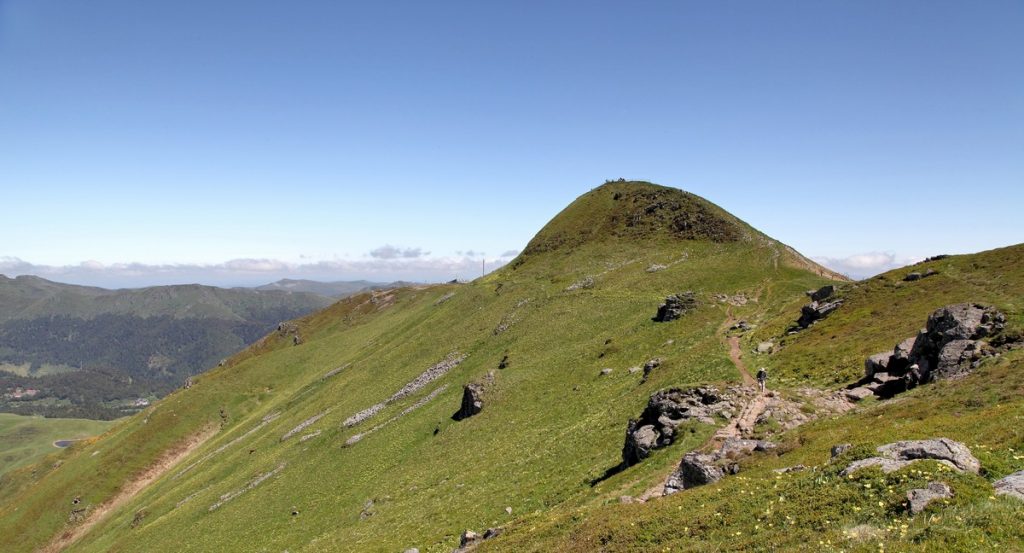 At a height of 1,855 metres, the Plomb du Cantal is the highest summit in Cantal and the second highest summit in the Massif Central (after the Puy de Sancy at 1,885 metres in the department of the Puy de Dôme). It is part of a mountain ridge dominating the valleys of the River Cère, Alagnon and Brezons and overlooks the villages of Saint Jacques des Blats and Albepierre.

Although this summit is more rounded in shape than the other surrounding summits, there’s still a 730 metre climb to reach it on foot. An alternative is to take the cable car from Le Lioran resort. A 10 minute ride followed by a short climb up a footpath and some steps will lead you to the top. From here you’ll be able to look far out across the Forez mountain range, the Margeride, Aubrac, Cévennes, Cézallier, Monts Dore and even the Chaîne des Puys mountain range. Much nearer you’ll have a wonderful view over the valley of the River Cère and Cantal’s great volcano. The panoramic view, like the Plomb du Cantal itself, is simply stunning.

Our special tip: Why not take the train from Vic sur Cère up to Le Lioran and then enjoy the cable car ride to the top? For the return journey, walk along the ridge overlooking the valley of the River Cère to then make your way down into the town.

Practical information: Access to the summit on foot from Le Lioran resort or Saint Jacques des Blats (estimated 4 to 5 hour round walk). The cable car is only open from Christmas to the end of March, a few weekends in the month of May and then from around mid-June to mid-September. You are advised to check that the cable car is running beforehand as it may be closed due to the weather conditions in the mountains.

The Puy Griou, one of the wonders of Auvergne’s volcanic activity 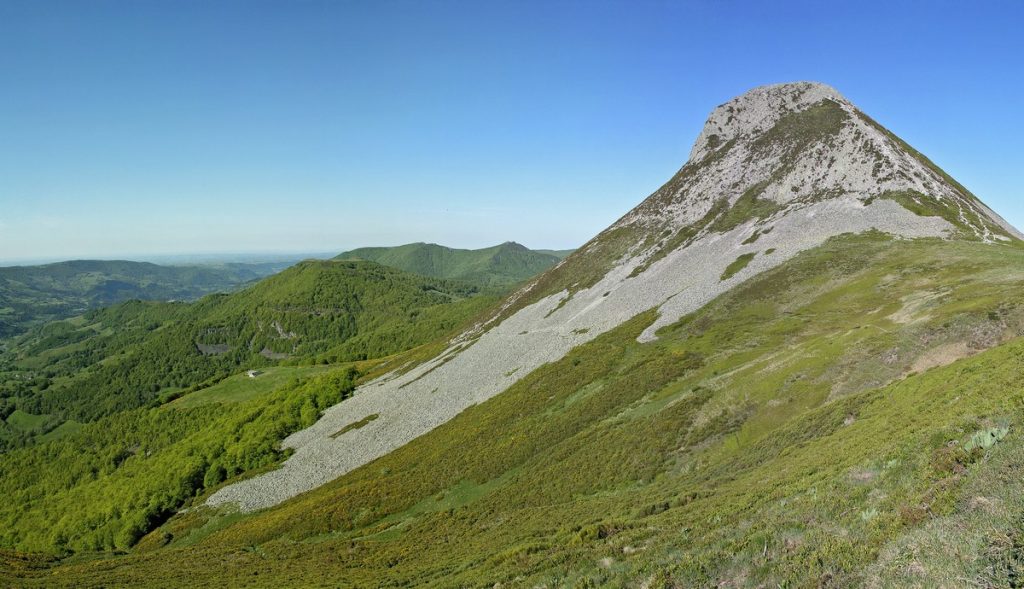 This is the most easily recognized summit in Cantal. Along with its neighbouring summits, the Griounou or the Petit Griou at 1,514 metres and the Usclade at 1,484 metres, it is part of a series of cone-shaped mountains all formed at the same period and that are situated in the heart of the Massif.

The icon of the Carladès area, the Puy Griou is a cone of phonolite rock that can be easily spotted from all the viewpoints across the area and even from the valleys thanks to its distinctive pointed summit covered in scree and stone slabs!

Reaching a height of 1,690 metres, the panoramic 360° view from the top is truly spectacular, taking in a multitude of summits and wide open spaces far beyond. It is important to note however that the final climb of the Puy Griou is quite technical and only for experienced walkers who are well-equipped for the steep and tough mountain climb over scree. The scramble up the final 15 metres is particularly difficult and not to be tried if you’re afraid of heights!

Take the time to listen to this volcanic rock while you’re there. The name of the phonolite rock comes from the word  phonos (sound) and lithos (stone) and when you strike the rock, it makes a ringing sound. The rock face of the Puy Griou was used to make the stone slabs that cover the rooves of houses in Cantal as well as the mountain shelters called burons.

The Puy Mary, a majestic pyramid formed by the glaciers

Along with the Puy Griou, the Puy Mary is without a doubt, one of the most beautiful summits in Cantal. Shaped like a pyramid, it stands out in the landscape. With a bit of imagination you might even be able to make out the shape of the backbone of a sleeping dinosaur extending along the ridge of the Peyre Arse towards the Brèche de Roland pass.

Access is from the Col du Pas de Peyrol, the highest mountain pass in the Massif Central and so only open from around May to October. Once you’ve parked your car, access to the summit is after a 30 minute climb up a footpath to the viewpoint table at the top.

he atmosphere at the summit is undoubtedly at its most magical in springtime as the wildlife, flowers and plants burst back into life after the Winter months. Despite the harsh climatic and ecological conditions at this altitude, you’ll find an amazing diversity of plants. You’ll also enjoy using your binoculars to observe all sorts of wildlife including stag deer, roe deer, mountain sheep and chamois goats or even more timid animals like marmots.

The Puy Mary and the magnificent ridges that spread out from its summit make up the Monts du Cantal area of outstanding natural beauty, protected and designated as such since 1985. Work has been undertaken at the site to protect the natural environment from the crowds of visitors that come here every year. The site has been recognized as part of the “Grand Site de France” network since 2012, a label reflecting the site’s commitment to management that applies the principles of sustainable development.

Our special tip: Enjoy the drive from the valley of the River Cère in Saint Jacques des Blats up to the Col du Pertus. From here you can then stop off at Mandailles and look around the Visitors’ Centre situated by the side of the River Jordanne.

Practical information: The Col du Pas de Peyrol is open from the Ascension bank holiday in May through to the Autumn half term holidays, depending on weather conditions. These dates may vary so you are advised to check before leaving. Access to the summit is either from the mountain pass, the Col du Pas de Peyrol (estimated 1 hour walk there and back) or a day’s hike there and back along the ridge from the Font de Cère near Le Lioran resort.

Nestled in beautiful fir tree forests, Le Lioran ski resort is situated at an altitude of between 1,160 and 1,850 metres.

The ski area is open every day from the end of December to the end of March. If there’s enough snow, the resort sometimes opens over some weekends in early December in which case you can even come along and enjoy the Winter fun before Christmas.

Le Lioran is also a paradise for nature-lovers in summertime with plenty of activities on offer for all the family to enjoy including mountain biking, a summer sledge run… and much more, so you’ll be kept very busy!

Our special tip: Download Le Lioran ski resort’s official app onto your smartphone. That way you can stay in contact with friends and family while out on the slopes, consult the weather forecast and webcams, reload your ski pass, look at the map of the ski slopes and much more!

Practical information: Le Lioran Ski Resort is open from the end of December to the beginning of April. The resort is also a great destination in the Summer and a wide array of outdoor activities is on offer!
Full details available at www.lelioran.com

We use cookies to ensure that we give you the best experience on our website. If you continue to use this site we will assume that you are happy with it.OkPrivacy policy