Perhaps you’re keen on Cantal’s local specialities. Well, the village shop in Polminhac run by Orianne and Sarah, both bubbly characters, “Le  Garde-Manger”, gives “Made in Cantal” pride of place. They enthusiastically seek out and work with small local producers. For visitors and locals alike, their shop is a great address for gourmet delights.

On entering the shop, drawn by the funny old bike and set of vintage scales in the window, you can’t help but be surprised. Taken over in 2016 by Orianne, a cook from Paris and Sarah who comes from Australia, a feel good vibe inside the shop is very pleasant. The girls have been living in Cantal since 2014 after falling in love with the area’s quality of life and beautiful landscape. “The two village shops in Polminhac had just closed, and having already made our home in the village and part of the local community, we wanted to start our own business,” says Orianne.

A village shop that gives pride of place to “Made in Cantal”!

If you pop into “Le Garde-Manger” to get something last minute, it’s more than likely that you come out with your shopping basket full! First, because the produce, for the most part locally sourced, is so tastefully displayed on shelving made from wooden pallets. But also because Orianne and Sarah defend local produce and specialities from Cantal or the Carladès area with such conviction and enthusiasm. They source their produce thanks to a complex logistics arrangement and qualitative criteria based on the product’s taste, appearance, but also on the spirit behind it.  “So far, we work directly with about 15 local producers that we have found on the Web and been to visit during the autumn period or on our days off. As we have acquired a good reputation, some producers now come and see us directly.”

This success was rewarded in 2017 after winning the Trophy for Business Creation at a ceremony held at the Prefecture in Aurillac.

Their motto says it all: “When you love something, you talk about it well!” The shelves are full of local produce; herbal tea made by Amélie in Vic-sur-Cère, organic Basaltik beer or the Vicoise craft beer, Auril coffee from Aurillac, apple juice from Junhac, farm ice-cream from Bergasol and Saint-Flour yellow lentils… There is also a great choice of Auvergne cheese on sale, with a tome cheese made entirely with milk from Salers cows, Cantal and Salers cheese from Caldayroux Farm in Arpajon sur Cère, a fresh goat’s cheese and tome cheese from Ladonne Farm in Mandailles, and one of the rare blue cheeses in Auvergne using unpasteurized raw milk made at Grange de la Haute Vallée Farm. 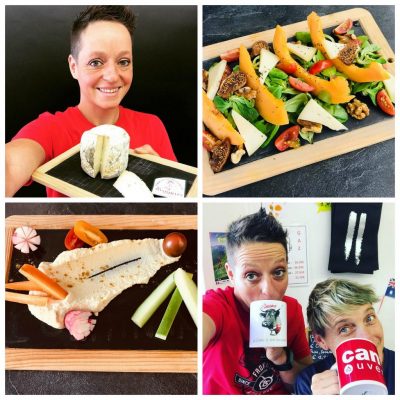 These are just a few of the local producers that Orianne and Sarah readily promote on their Facebook page, which reflects so well their energy and enthusiasm.

Some of the producers even come along to their shop to offer tasting sessions and get to know the customers. In a relaxed and friendly atmosphere, it’s the perfect opportunity to use local produce with innovating recipes, such as this La Planèze yellow pea tabouleh or Saint-Flour yellow lentil hummus.

“We sometimes sell local specialities such as pounti or fritons.” Not to mention Madame Montil’s bourriols, a neighbour, delicious buckwheat pancakes made from whey and baker’s yeast, sold plain as and when they arrive.

“I do miss cooking,” admits Orianne, who plans to develop a selection of take-away vegetarian dishes for customers. The team has also developed services to help out local residents including home delivery, the sale of bottles of gas, book exchanges, etc.

The enterprising owners are never short of ideas. They are both sporty, practising football and trail-running and have conjured up the idea of organizing “apero-runnings” several times a year which, as they explain, consists in “an hour’s steady jog followed by the reward of an aperitif buffet!”

Before paying for our items, it’s also a lovely idea to enjoy refreshing fruit juice sitting out on the shop’s back terrace overlooking the stream. 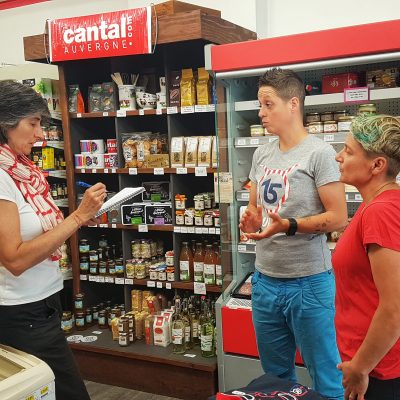